Note: This article originally appeared in the May 2017 issue of The City Paper Bogotá, and can be found on the newspaper’s website here. See more of my writing in this publication in “Other Writing.”

When I first arrived in Bogotá, my circumstances were unusual. Dreamy, you might say. I was awarded a competitive postgraduate traveling fellowship to study salsa and research the art scene in the capital. Besides these activities, I covered as much terrain as possible, constantly researching a cultural practice, reading reviews of an eco-hostel, and budgeting for my next trip. Whether you have only a few weeks to travel or can take puente getaways, I hope two main takeaways from my travels can help you enjoy more engaging trips: follow the festivals and sprinkle smaller towns into your itinerary.

Colombia ranks as one of the happiest countries in the world, and its culture of celebration deserves some of the credit. The rumbero, or party-loving, nature is manifested in the hundreds of festivals of all sizes and themes. If your visit coincides with a festival, you’ll see first-hand the national pride characteristic of Colombians. Locals embrace visitors in the revelry. But best of all, several undesirable elements inherent to tourism–like voyeurism and emphasis on transactional exchanges–can fade to the background if you express genuine interest in learning about–and participating in–the traditions that define the national identity.

With so many over-stimulating parades, my travel style is to retreat to a small town to rebalance. Though I believe that many small towns are worthy of a standalone trip, I usually visited pueblos as a refuge from urban chaos or festival hype. Without the pressure of checking off a list of museums and monuments, visiting a smaller town allows you to focus on a single aspect of nature, culture, history, art, or cuisine, while fitting in some relaxation. With less information in your go-to guidebook, visiting these types of towns also encourages you to engage with locals. Among 21st century travelers, accustomed to having Google Street View at our fingertips to go as far as virtually walking through neighborhoods before arriving, the sense of adventure and attitude of receptiveness generated by a visit to a remote pueblo is refreshing.

My search for destinations with a distinctive character led me to riverbathing in Guadalupe, touring a soccer ball factory in Mongui, goat meat-sampling in Barichara, stargazing in the Tatacoa Desert, chocolate-farm touring in Minca, wax pam valley hiking in Salento, teepee-living in Guasca, and my favorite archaeological adventure to date: exploring the subterranean tombs at Tierradentro.

A trip segment that showcases my travel philosophy of paring a cultural festival with a remote destination was my visit to Americadanza in Popayán, followed by a two-day jaunt to Tierradentro. Americadanza, the Folk Dance Festival of the Americas, featured performances from six countries in a grand opening under Popayán’s Puente el Humilladero. After several days of being hypnotized by the gyrations of the Easter Island Rapa Nui dancers, I embarked from Popayán on a 7-hour bus ride, heading further inland towards the border of the Cauca department with Huila.

Not for the faint hearted, the bus raced along the partially paved road, winding around tight curves in the Cordillera Central and through windswept páramos. I got off at San Andres de Pisimbalá, a hamlet of 700 mainly indigenous Paez or Nasa people. During my night at La Portada, the main lodging and dining option in town, I learned that two full days are ideal to leisurely visit the two museums and all five sites of the archaeological complex. In addition to four zones of burial grounds, the park contains a site, El Tablón, with monolithic statues resembling the stone figures at San Agustin. I hoped that with an early start, I could do it all before catching the afternoon bus back to Popayán.

Early the following morning, as mist lifted off the surrounding cliffs, I reached the main entrance and purchased my “passport” to the ruins. Though eager to reach the tombs, I am grateful that the park guards, doubling as guides, ushered me into the archaeological and ethnographic museums. The archaeological museums displays a wealth of ceramic artifacts, including elaborate funerary urns containing skeletal remains and even teeth that date to around 700 to 900 A.D, the period during which the tombs were created. The informative labels, exclusively in Spanish, discuss what is known and what remains a mystery surrounding the religious beliefs of the people of Tierradentro and their burial practices. 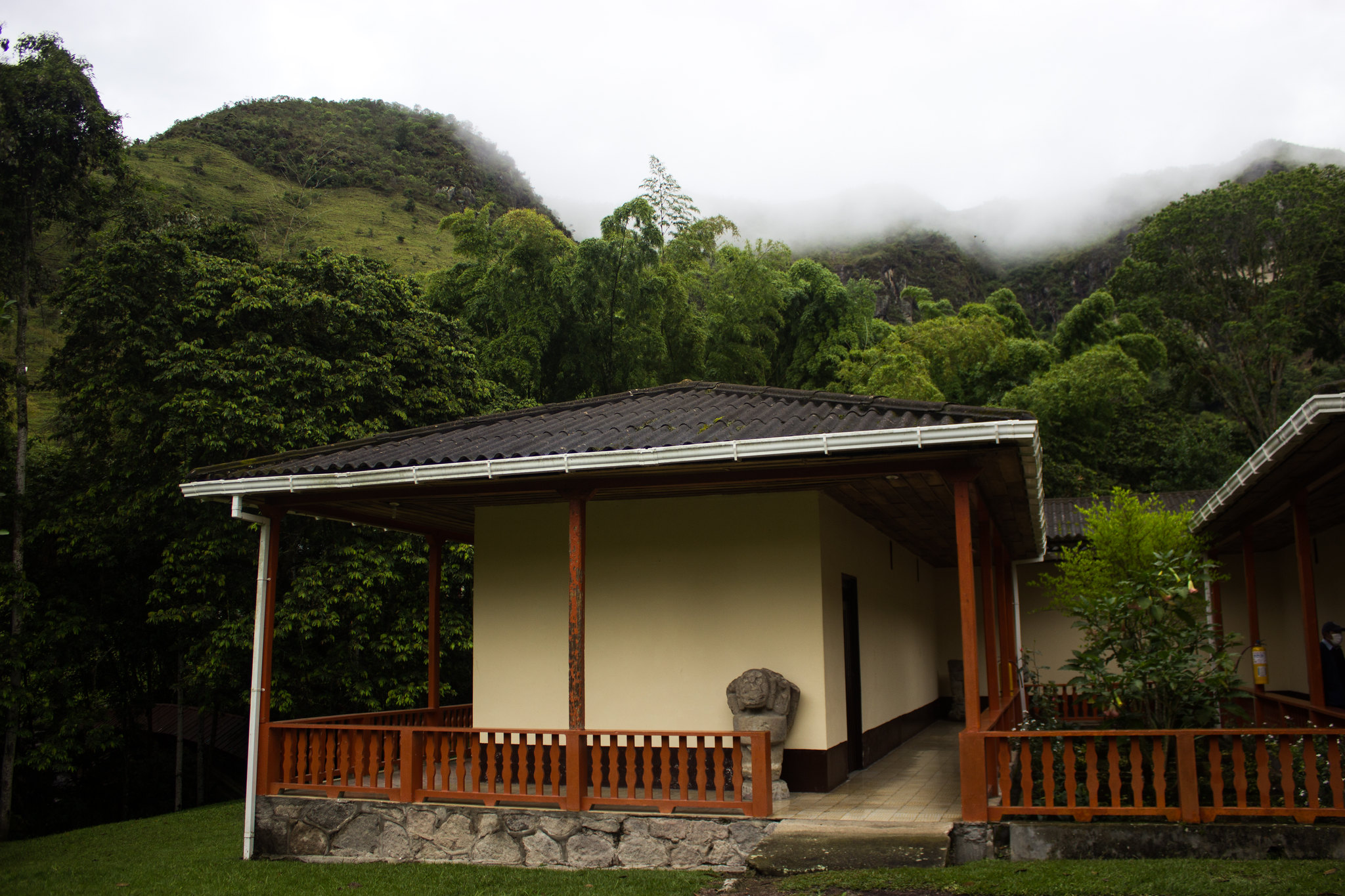 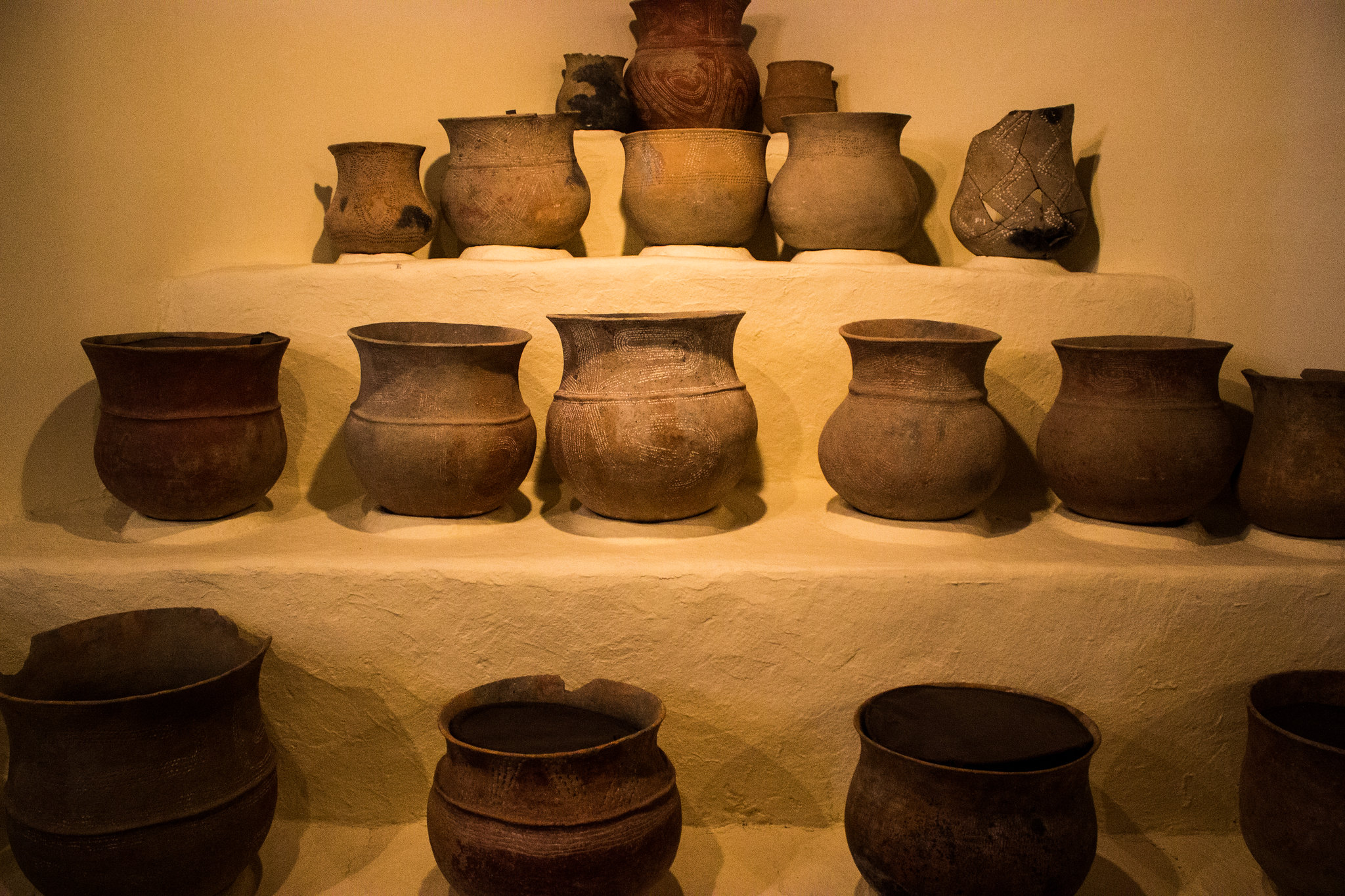 Once I reached the first set of tombs at Segovia, I applied information I gleaned in the museum to make sense of the intricate decoration in the tombs. Likely working in the dark with rustic tools, the people of Tierradentro dug pits into the ground of volcanic rock, sometimes as deep as nine meters, carving large steps to form spiral and zigzagging staircases.

Then they hollowed out lateral chambers and carved sophisticated structural details like niches, columns, and pilasters. With red and black paints from minerals, they decorated the interior surfaces with geometric, anthropomorphic, and zoomorphic motifs and carved reliefs. 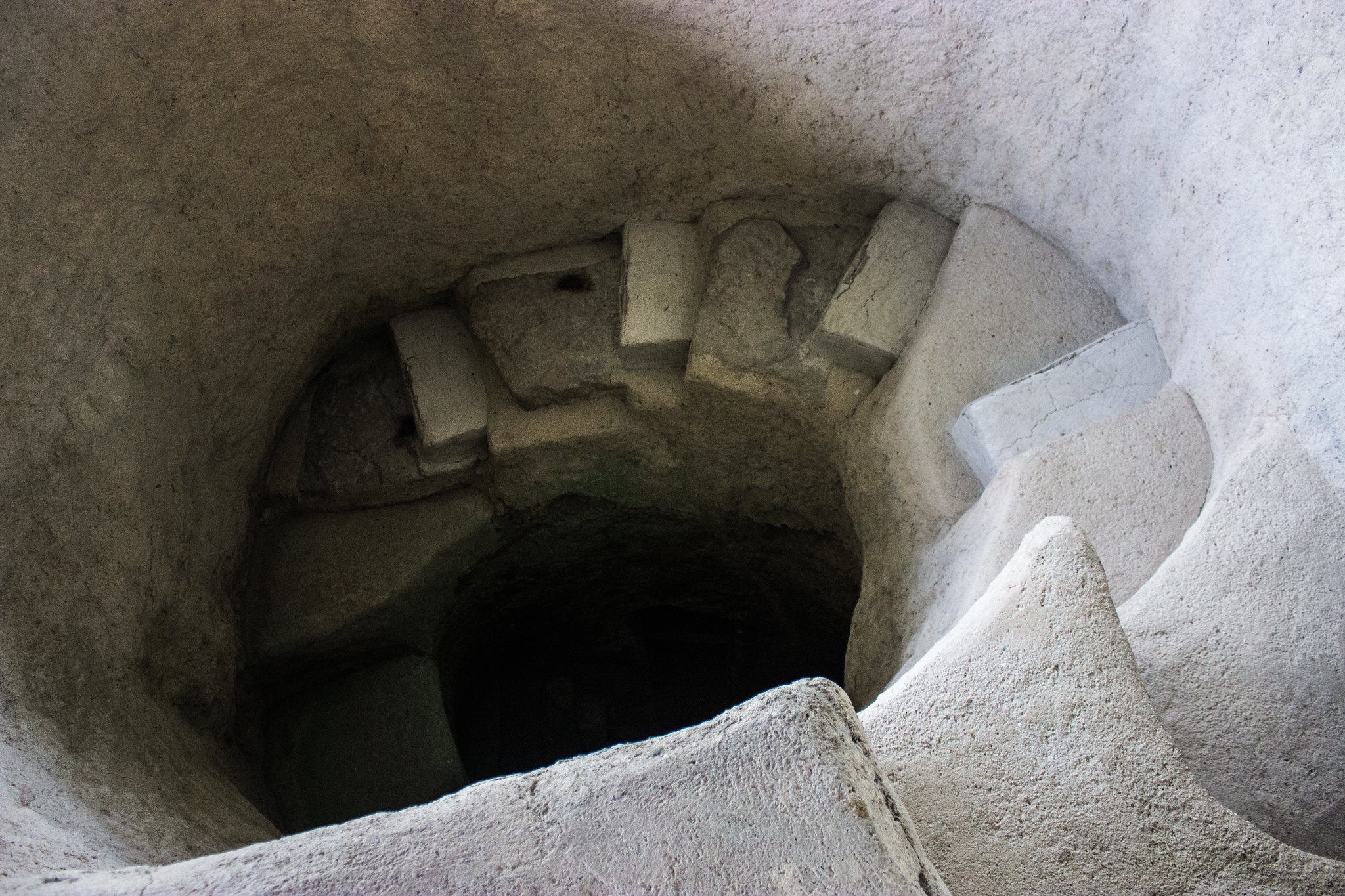 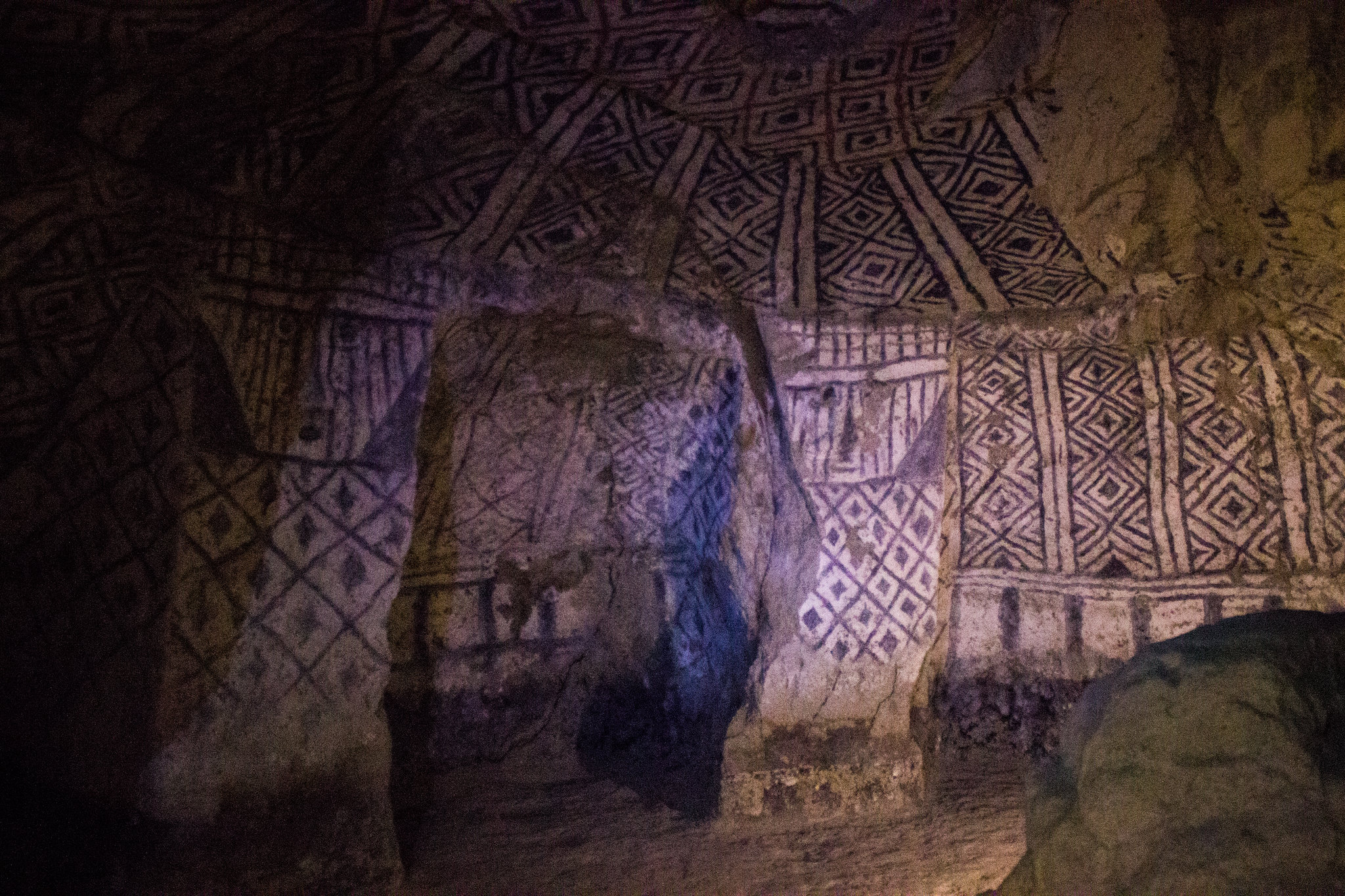 Although the hypogea were looted before the government protected the park in 1991 and before it was declared a UNESCO World Heritage Site in 1995, many funerary objects were recovered, and the tombs are remarkably well-preserved. Once you clamber down the tall steps and light your torch, you, too, can observe that the tombs are nothing short of spectacular.

The combined storytelling from the bilingual tomb labels and the guards adds another layer that enriches a visit to this park. The signing details architectural features and summarizes the excavation history of each hypogeum, and, if you are lucky, the guards will share mythical and factual anecdotes as they unlock the barrier to each tomb and lead you down. One of the more talkative guards told me a colorful story, that I later verified on a label, about how one of the tombs contains the ashes of an archaeologist, Alvaro Chaves, who died in 1992 after dedicating his career to solving the mysteries of the tombs and the culture that produced them. 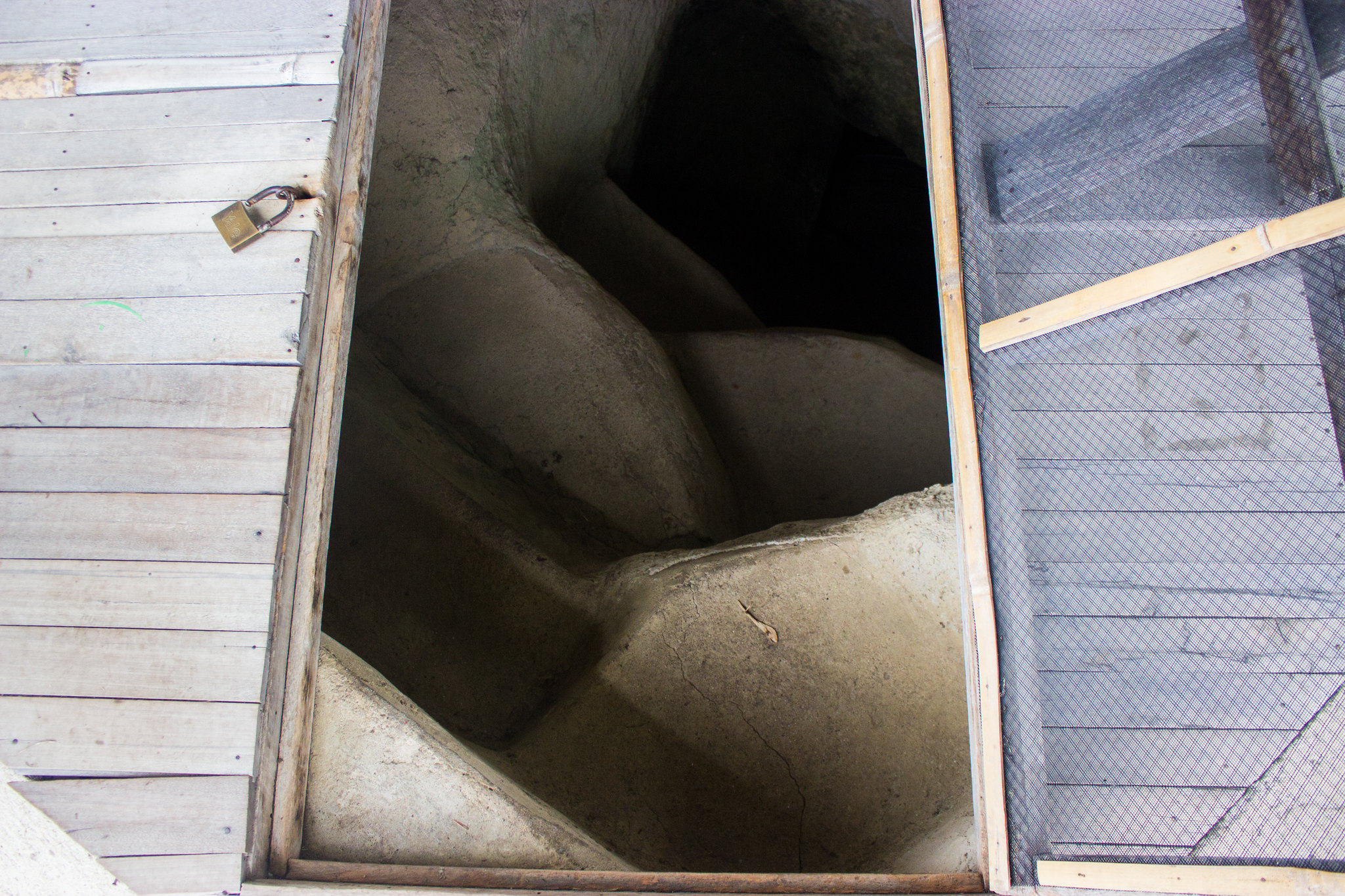 Though I was unable to visit one cluster of tombs on my limited timetable, after a full day of strenuous hiking and frequent descents to the underground chambers, my knees were shaking and my mind buzzing with curiosity about how the Tierradentro people lived and died. The vistas of mountain ranges on the trail are reason enough to hike the park, and adding to this the intimate contact with stunning funerary chambers, visiting Tierradentro will transport you to pre-Columbian times and sweep you into its enchanting archaeological puzzle. 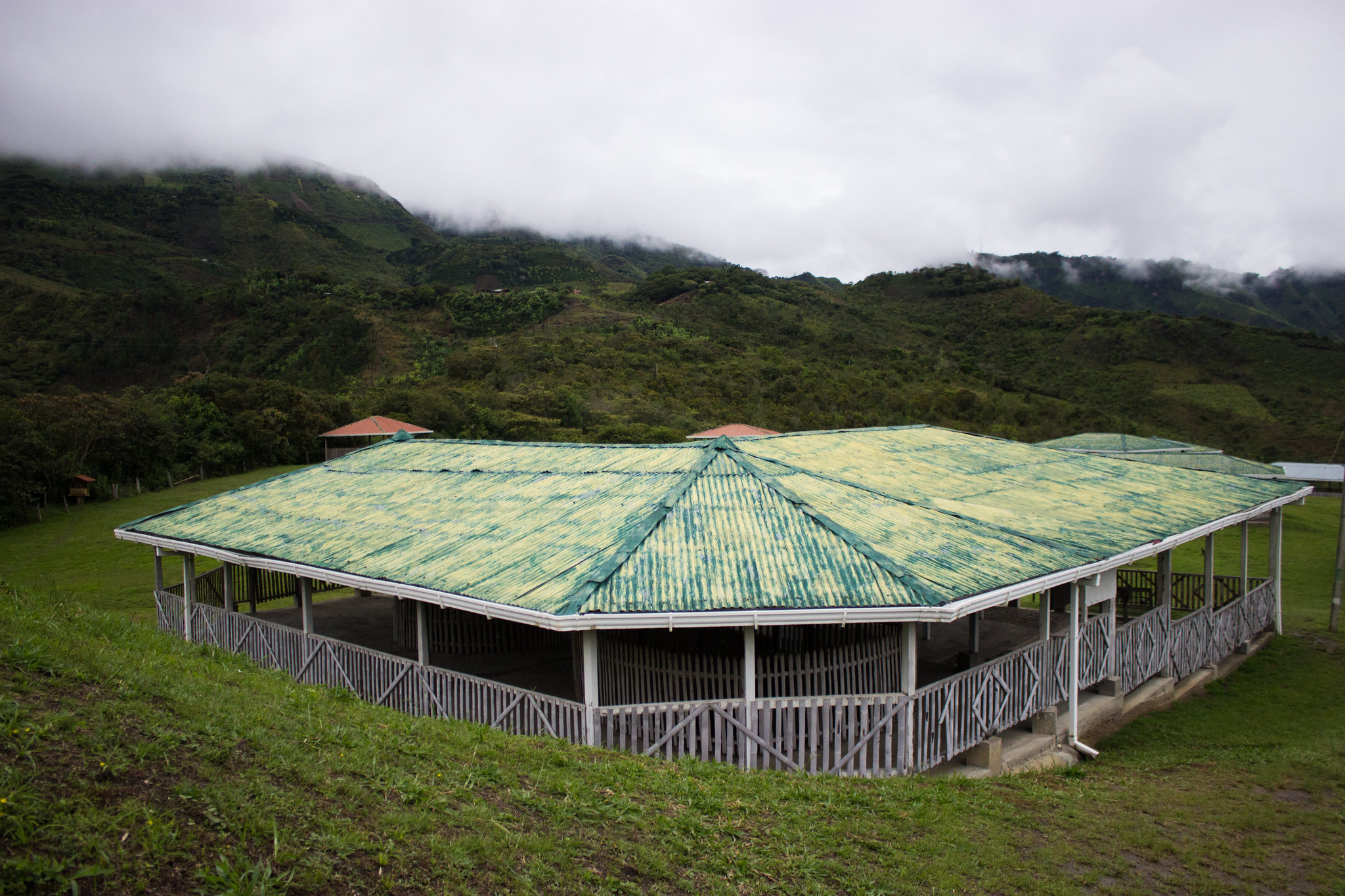 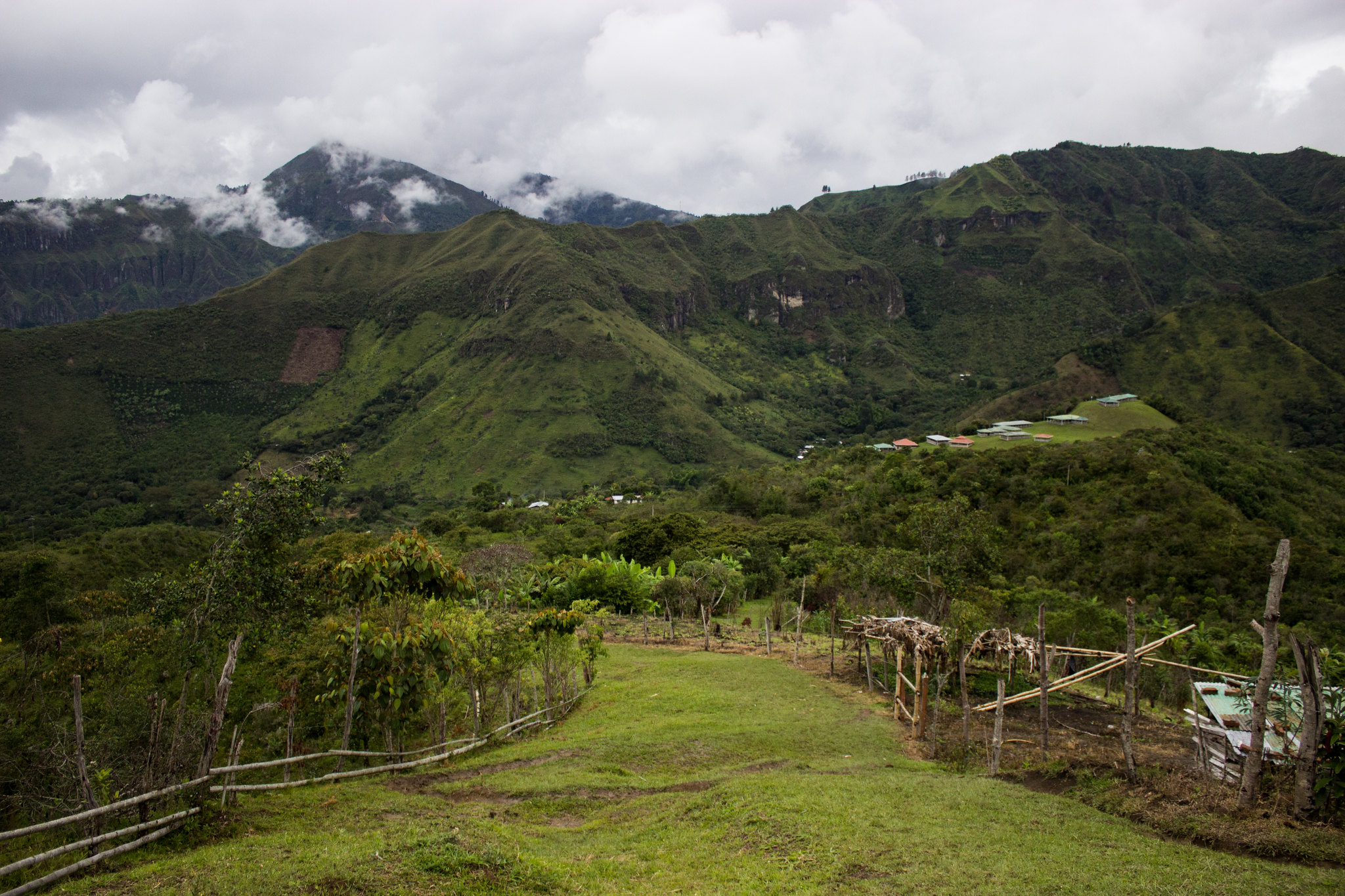 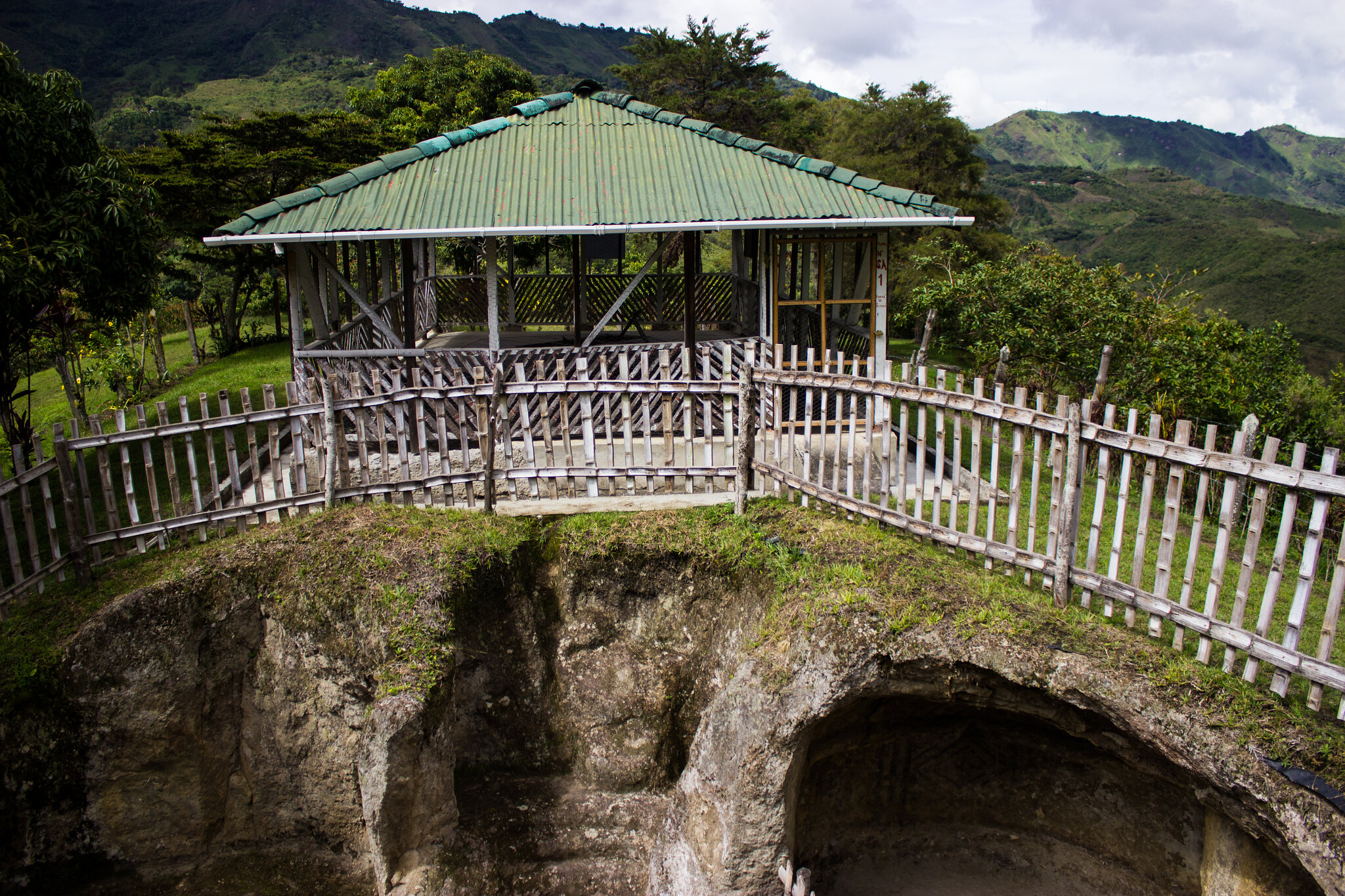 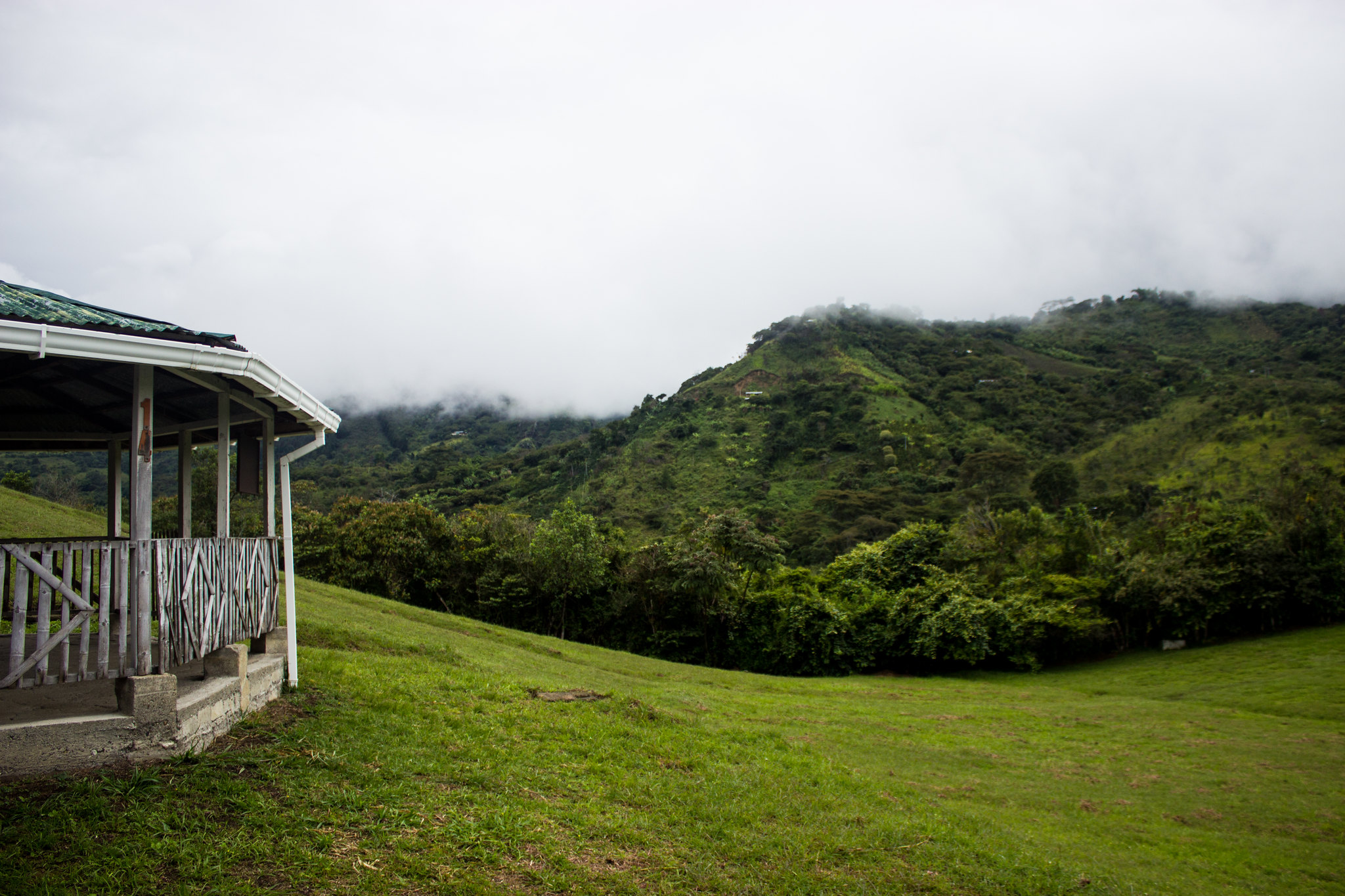 discovering new nooks and crannies of camberville each time I turn down an unfamiliar street to maintain social distancing
my bimonthly stroll through Mt Auburn Cemetery to observe seasonal changes was as scenic as usual but a tad more eerie. It was designed in an era when rapid urbanization—rise of tenement housing coupled with poor sanitation systems—had created public health crises in many US cities. Notions of death were evolving, and with the medical knowledge of the day, local lawmakers believed that parks and spaces designated for outdoor recreation were of critical value for wellness of their communities. While miasma theories may not dominate anymore, the fresh air and design promoting reflective wandering and tranquility are much appreciated in these trying times
showing visitors around campus / town can really open my eyes to new discoveries in my midst, like this Danh Vo sculpture chillin in the Smith Campus Center (that I somehow missed!). Titled “We the People,” it’s a piece of the full scale replica of the Statue of Liberty he commissioned in 2011 and then exhibited as separate parts — seems like an apt representation of how fractured the politics of our nation feels after a week like this one #danhvo #wethepeople #neverthelessshesmyrolemodel
grateful for this adventure partner who is game to try all the activities I cook up 🥰
embracing new england winters
curves & textures on teal